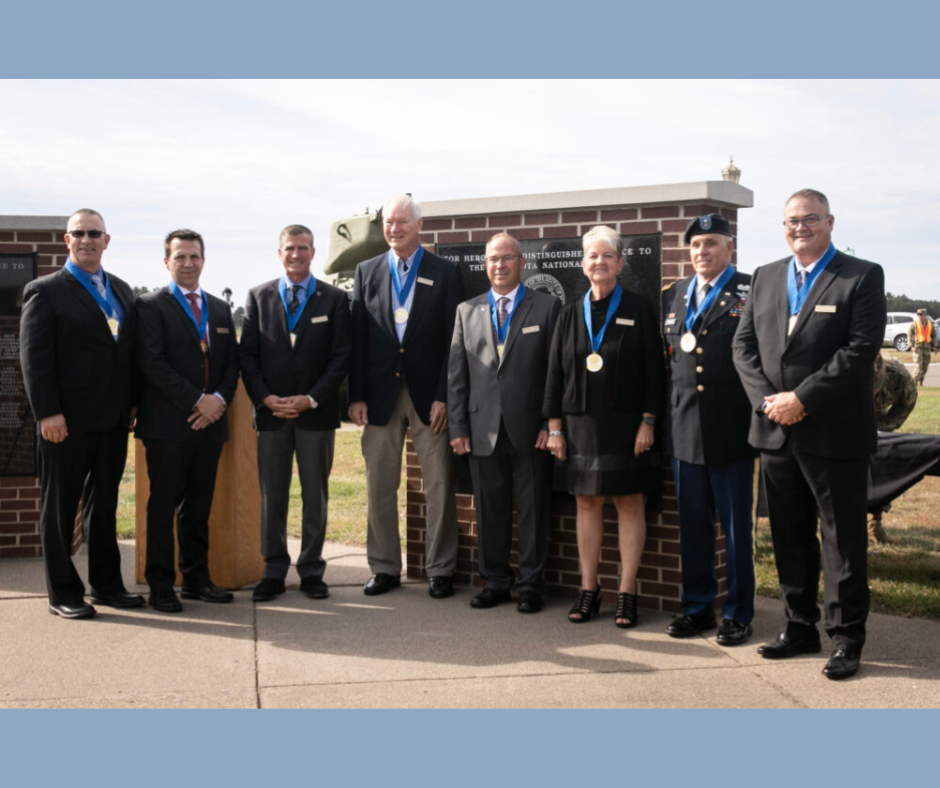 Family, friends, and service members gathered at the Gen. John W. Vessey Recreation Center on Camp Ripley near Little Falls, Minnesota, to honor ten individuals, inducting them into the Court of Honor, Oct. 2, 2022.

“The Court of Honor, located at the [Minnesota] Military Museum on Camp Ripley, provides a prestigious and visible area for the purpose of recognizing and remembering those individuals who have, through dedicated service to state and nation, attained uncommon prestige,” said Army Col. Joe Sharkey, chief of the joint staff of the Minnesota National Guard and master of ceremonies for the event.

Service members or civilian employees of the Department of Defense and Minnesota Department of Military Affairs have been memorialized at Camp Ripley since 1933 based on their heroism, professionalism, and service. During the first year, more than 150 individuals were honored.

The Court of Honor ceremony is a process of honoring service members and civilians who have committed their lives to excellence in the Minnesota National Guard and the community. The process begins with individual nominations which are reviewed and recommended by the memorialization board and approved by Minnesota’s Adjutant General. Since 2009, the memorialization board has hosted annual induction ceremonies.

Their names join over 500 others etched in the Court of Honor’s walls.

The event began as Army Maj. John Shay, Camp Ripley’s installation chaplain, led a chapel service for the honorees, their families, and friends. After the service, the honorees attended a nostalgic lunch surrounded with new and old battle buddies at the dining facility. As the veterans were catching up with old friends, the 34th Red Bull Infantry Division Band prepared for the start of the ceremony.

By 1 p.m., the ceremony began as the official party, consisting of Army Maj. Gen Shawn Manke, Minnesota’s adjutant general; Army Maj. Gen. David Elicerio, chair of the memorialization board; and Minnesota’s Army Command Sgt. Maj. George Jensen, made their way to the stage while the band played, and the color guard posted the colors.

“To the friends, family, and Soldiers here today,” said Elicerio. “Thank you for coming and making this a special day for our honorees.”

During the ceremony, Elicerio hung a medallion around each honoree’s neck in recognition of their induction into the Court of Honor. Each honoree was also given an opportunity to speak. Many of the honorees reflected on their careers and thanked everyone who helped them along the way.

“As you may have heard, the Court of Honor recognizes individuals with distinguished service records,” said Panos. “I believe what it really does is recognize the individuals as the face for all the enlisted, [noncommissioned officers], warrant officer, and [commissioned] officers who, through their support and guidance and their accomplishments, have allowed us to have outstanding careers.”

“This is something that I’ve been involved with and known about for many years and would have never dreamed that I would be on this stage today, accepting this honor,” said Buszta. “Especially since I started my military career right here at Camp Ripley over 44 years ago. I am humbled and honored to share the stage and this award with the top-notch military soldiers that were nominated this year.” After each honoree was formally recognized, the unveiling ceremony began near the Minnesota Military Museum at the Court of Honor site.

The honorees came forward one by one to reveal their names engraved on the granite walls of the Court of Honor, signifying the end of the ceremonial day.