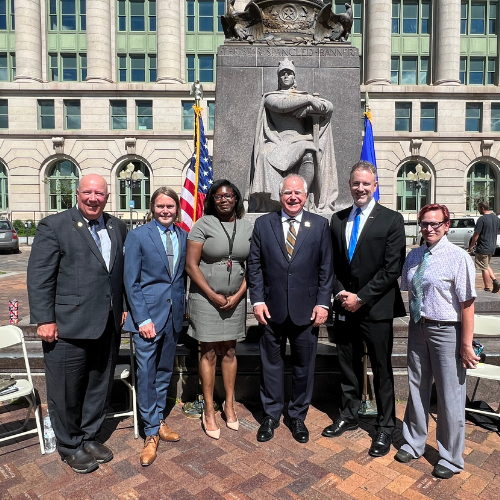 Vets are housed quickly and supported with services to help them stay that way, officials said.

Citing the speed at which veterans are housed and the services in place to support them, Walz said the model used by St. Louis County and others that have also reached the milestone can apply to other homeless populations.

“This really does embody the best of Minnesota,” he said, doing work together “to give somebody a hand up, especially those who were willing to serve us.”

A network that includes the Minnesota Assistance Council for Veterans, state, county and Minneapolis veterans’ services and emergency shelter staff works to fund housing and services for the county’s unhoused veterans. Courtney Cochran, who coordinates the effort for St. Louis County, said a list of 30 veterans needing homes in 2019 has shrunk to three, and housing for that remaining number is being finalized.

“We know there will always be more,” she said, but Thursday’s declaration means the county is placing veterans in permanent housing on average within three months, and that episodes of homelessness are rare and brief. The county’s average has previously been two years for placement in the Duluth area, and up to a year in its northern reaches.

Supportive housing vouchers for veterans from the U.S. Department of Housing and Urban Development come with the services of a social worker, which has been crucial to ensuring stability.

“We can house people, but if we don’t help them with their life skills, their housing may fail,” said Paul Pederson, a north region case manager for the Minnesota Assistance Council for Veterans. “Are they going to go shopping? Do they know how to cook? … We reteach people how to survive on their own.”

Outreach workers find homeless veterans who want help in Duluth’s warming center, at shelters and on the streets, Pederson said, and screen them for needs. There are services even for veterans who weren’t honorably discharged.

“I am particularly appreciative of our team’s effort to ensure we can serve any veteran experiencing homelessness no matter where they are within the large geographic space that is St. Louis County,” he said.

The county, home to 16,000 veterans, is one of the final regions in Minnesota to end veteran homelessness under the parameters laid out by the state.

Cochran said the model is already being applied to other homeless populations, such as youth and families.

“I’ve been involved in housing for more than a decade, and I’ve never gotten to a point where a model has worked so well,” she said.

Jana Hollingsworth writes about the Duluth/Superior region. She joined the Star Tribune